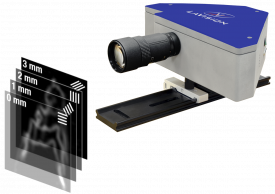 The FRAME imaging technology offers the unique ability to acquire and store multiple exposures in one frame of a standard camera sensor. This new Frequency Recognition Algorithm for Multiple Exposures (FRAME) imaging concept uses an image-coding strategy, where different exposures are given a unique structural code allowing multiple on-chip exposures before readout. At the end of such a superimposed recording each image is unlocked by its unique structural code. This on-chip recording of structural coded images opens up a variety of new measurement schemes such as

Ultra-high-speed imaging
Together with researchers from Lund University LaVision has developed a FRAME imaging setup for high speed shadow imaging. The FRAME illumination unit consists of 4 pulsed LEDs firing a sequence of 4 structural coded illuminations at a frequency of up to 1 MHz. A standard still camera captures on-chip all 4 exposures. After readout a post-processing procedure decodes the multi-exposure recording into the 4 time-separated snapshots. 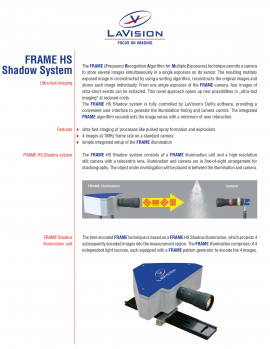